In History class, we have been analysing ome Case Studies that show the tension between the two superpowers (USSR & USA) during the Cold War years. Between them we can find:

Last class, we watched a video about the Cuban Missile Crisis from 1962 and we were given a task to answer:

1. Produce a Mindmal outlining the causes of the Cuban Missile Crisis. Use ilustrations and extra details from the text pvook as appropiate. 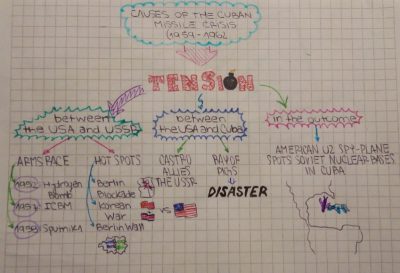 2. Produce a Venn diagram showing how the USSR, the USA and Cuba are responsible for the Crisis. 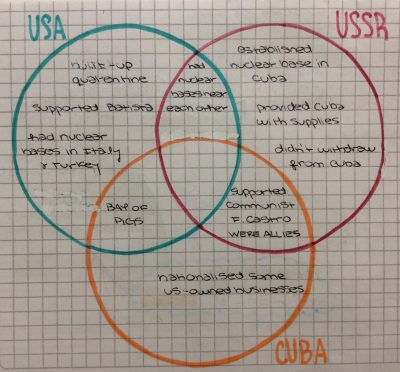 3. Using your completed diagram, answer this question: “Which country is most responsible for the Cuban Missile Crisis?”

On the one hand, it all began when the Communist Fidel Castro took over the Cuban ruling, who nationalised some US-owned businesses and allied with the USSR.

On the other hand, if it hadn’t been because the USA supported Batista, Castro would not have had such success. Also, if it had not had nuclear bases in Italy and Turkey, near the USSR, it might not have been eager to settle a nuclear base in Cuba, near the USA. And if there had not been a Soviet nuclear base in Cuba, the USA would not have invaded Cuba and caused such disaster at the Bay of Pigs neither she would have built the quarentine around Cuba to survey whether any ship was carrying missiles or weapons.

Furthermore, the USSR supported Communist Fidel Castro and, therefore, allied with Cuba. If that had not been the case, she would not have supplied the island with oil, machines, money, including weapons, nor she would have established a nuclear base. That way, she might not have caused much trouble hen she was asked to withdraw from Cuba.

In conclusion, the most responsible for the Cuban Missile Crisis was the USSR beacuse of everything I previously mentioned.