Art as a Form of Creation!

Now that we have finished analysing all the poems from the movement contextualized in the First World War; War Poetry. The totality of these criticised war and everything that caused it and the foregoing consequences. Yesterday for Literature class we were assigned to bring either an article, a poem, a song, a video, a picture or a drawing connected to war in some way to be able to relate the poems to real life and understand how reality is not that different from the history that we learn as if it happened far far away in the timeline of humanity. The teacher divided us into different groups formed by students who had presented each a different poem. My group was conformed by Juan de Elia, who had done Soldier, rest, Trinidad Porretti, who had done Dulce et Decorum est, Sol Santayana , who had done Anthem of a Doomed Youth and Francisco Montoya, who had focus on the analysis of Death. Casually, all of them brought something different; Juan brought a movie, Trini two TED Talks, Sol two articles, Fran a cartoon and I brought a drawing drawn by myself. We spent the class periods developing each of our ideas, why did we chose what we brought, to which of the poems we could relate them and how. Once we had finished discussing, we were given a tiny piece of paper in which we had to write a word, a phrase and an idea that could summarize the topic as a whole and then share altogether our choices.

I brought a drawing with the purpose of representing war itself: 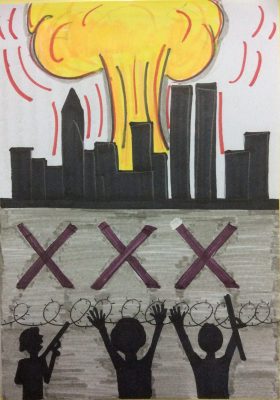 In the drawing is represented an image of soldiers in the trenches on battlefield celebrating, for their army was the one that threw the bomb at the enemy city and explode, which means that they won the war. I could relate it with the poems read in class in different ways. Firstly I was able to connect it with Futility , By Wilfred Owen, because it tackles the pointlessness of war. While the soldiers are celebrating they have won war, in order to do so they are blind to the fact that by doing that they were causing destruction. Through this, war is considered useless. At the same time that it is meant to solve problems and conflicts between countries and nations by decimating the enemy to prove superiority, it is causing more tension and quarrel. Secondly, I can relate it to the poem Death-Bed by Seigfred Sassoon, Death by William Bell Scott and Soldier, rest by Sir Walter Scott. We have seen that war doesn’t solve anything by the way in which it refers to Futility. Besides, instead it produces death and suffering everywhere. This gives life much less value. By living in the bloody atmosphere of war, soldiers are little by little less eager to live and death does not seem so horrible after all. Besides, it can be connected to Anthem of a Doomed Youth , by Wilfred Owen, because of the fact that millions of soldiers die in action while fighting for their country. They sacrifice themselves but they are not even recognised that merit. For all of this, the drawing can be connected to the poem by Wilfred Owen Dulce et Decorum est by Wilfred Owen. This is because war supposedly produces a feeling of glory as soldiers are fighting for their own country. However, that glory is a deceit because soldiers, by being on battlefield, understand that war is cruel and terrible which makes them want to die and that their sacrifice is not worth neither appreciated.

On the contrary, Trinidad Porretti, from my group, brought two video; Ted Talks more specifically. Although we did not have the enough time to watch them, she told us about it thoroughly in detail. The first video dealt with a more actual and more personal perspective of war. On the one hand, there was the one from an American soldier who had been sent to fight in Iraq. He unfolded his story not only narrating how war showed the worst qualities of human but also the best ones. Human can be  harassing and destructive towards other humans like him which he chooses to consider as the enemy though they are the same. Meanwhile, he can be friendly, compassionate, and empathetic towards his brothers, the other soldiers fighting along him; he would risk his life for his fellows.

This first video can be connected to Dolce et Decorum est because of the theme of brotherhood. In the poem, Owen tries to convince the audience that the concept of war bringing glory is false by portraying the traumatic moment in which a soldier witnesses the death of another one, and drowns in dreadiness for his brother’s death. Furthermore, it can be related to the poem Futility as it makes reference to the fact that man bears wreckage of the world and humanity, fighting against people that were made just the same way.

On the other hand, the other Ted Talk was about a historianwho analysed how life as individuals and as a common society is affected due to the features of war nowadays in the twenty-first century, different from the ones from world War One and Two that took place in the twentieth century. At this point, most of the wars are yielded because of the unequal distribution , use and trade of resources which could be replaced not generating any problem. Besides, previous  clashes, such as 9/11, have up-brought social prejudicies by generalizing and overviwing a whole community as equals instead of taking into account the diversities that each individual forming the community has.

This other one can be relationated with Death as it suggests that in life humanity is divided into several clasifications in which not necessarily every person fits with all the characteristics that are attributed to him or her just due to being considered part of a group. Moreover, I can establish a connection with Futility because it questions why man was created if it will bring about war and the obliteration of earth. Similarly, the historian prompts that instead of looking for solutions that do not compromise the Earth’s fate, human chooses war.