Art as a Form of Creation! Part 2

As the final work for our Literature project “Art as a Form of Creation”, we were assigned to look into problems that have been affecting the world in our actual time, day to day. We had to develop three main points, point out a possible solution and show evidence of the hassle:

For that matter, I chose to talk about the Abortion Law in Argentina:

It was last year in 2018 that the quarrelsome environment between green scarfs and blue scarfs aroused intensely. They began to fight for the approval or rejection of the Law of Abortion by the disputes and senators of the Congress.

This law is genuinely addressed as the Project for the Decriminalization of Abortion which was proposed by the Campaign for a Legal, Secure and Free after being previously presented seven times in the past eleven years. This one consisted of twelve articles:

The first article establishes that every woman should have the right to voluntarily decide whether to interrupt or not her pregnancy during the period of the first fourteen weeks.

The third article suggests, the same way that the eighty sixth article of the penal code says, that in case of a violation, the risk of the woman’s life or the existence of severe malformations that would imply the infeasibility of the fetus, the pregnancy can be interrupted with no restriction of time.

The fourth and eighth articles feature that a girl between the ages of thirteen and sixteen is mature and competent enough to decide if she wants to go on with the procedure. Whilst girls under thirteen years old need the company of her parents, she still has the right to take the decision.

At the same time, the articles numbered five, six and seven force social works to provide comprehensive coverage of health for the public sector.

The ninth articles proposes assistance for handicapped people or with a restricted judicial capacity. The tenth one allows women to claim the interruption of her pregnancy anyone who has the ability to gest, vindicating the trans men who get pregnant.

At last, articles eleven and twelve derogate articles 85, 86 and 88 which give women who carry on their own abortion and professionals who do an abortion one to five years in jail.

Most of the women and men who had been demanding the recognition of this project were feminists; people who claimed equal rights for women as for men. However, there was a group of these  which turned this vindication of rights into a rebellion; the abortionists or the “green scarves” who said that because it was ilicit to carry out an abortion by a professional, women did it on their own, not only killing the life of the fetus but the life of the mother. Riots in the block of the Argentine Congress broke out on their behalf whilst there were also marches held by the converse group; “Salvemos las 2 vidas” or the “blue scarves”, who stated that it was obscene to deprive the fetus of the life that it was given either it happened illegally or legally. Aggression between these two sides became the centre of attention for a great part of the national population by mid 2018.

The same way that happened the last seven times, the law was once again rejected by the senators and disputes of the Congress though the votes had been utterly competitive as they were just in line, below or above one another.

On the one hand, the most efficient solution would be to approve the law project. I am not neither on the side of the green or blue scarves. I have friends who are on favour and friends who are against its approval. Therefore, I have heard both arguments which I think are both valid. So, how can I justify my opinion of what could be a solution to this endless fight? For starters, I am not on forward with the idea of killing lives, either on the inside of a person or one that is giving birth to one. Hence, i’d rather try to prevent this kind of situations from happening, but as the various methods that were implemented to do so were and are nonfunctional on the practice, I choose to solely allow women who suffered from a violation or is on risk of losing her own life, to decide if she wants to go on with the abortion procedure. Otherwise, clandestine abortions would keep on occurring ending with the lives of both the baby and the mother. Furthermore, I want to emphasise in the fact that just professionals who are willing to do the operation should do it.

On the other hand, those women who end up being pregnant for different reasons other than a violation, ought to give birth to the baby when its due. Shall this unexpected pregnancy form regarding lack of protection through the own fault of the parents to be and they have the resources to support a baby with its basic necessities, the fetus should continue with its gestation period. That way, people might finally learn to put into practice the sexual education provided to them. At the same time, the law 26.150 of ISE(Integral Sexual Education) must be thoroughly and properly exerted. Likewise, the population must be willing to learn and put into action this education. Side by side this two factors must work in order to reduce the rates of unwanted pregnancies. 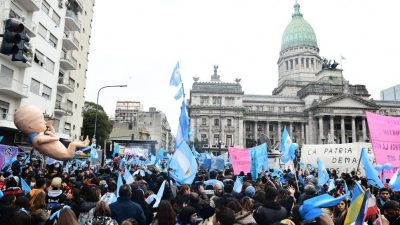 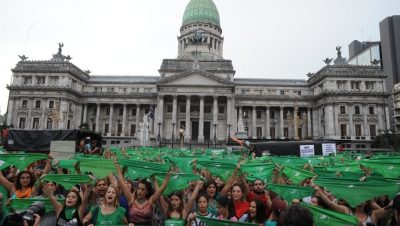 March of the abortionists (green scarves) at the Argentine Congress 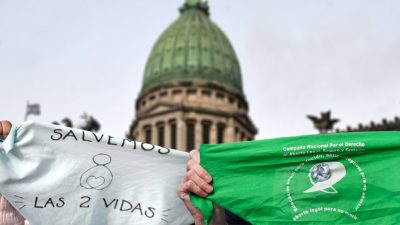 Una respuesta a Art as a Form of Creation! Part 2