In Art we have been working on a project. It all started with the simple question “What is the definition of Art?”. Upon that inquiry, we have looked for a definition of art by a famous artist, connected it to an artwork from an actual profitable artist from a selection that our teacher made for us. From that batch we also chose our favorite artwork and analyzed it. Later on we were told to develop an artwork which had to share similarities with our favourite piece.

My favorite was the piece Ninfa by the hyperrealistic argentinian artist Diego Gravinese which is painted in oil on canvas. 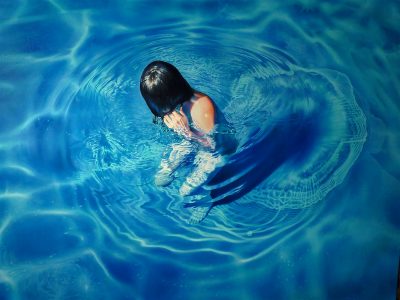 Based on this masterpiece, I first came up with the idea of trying to copy it in order to make it as similar as possible, believing that with no such expertise I would be able to. Therefore, I began drawing the sketch on black pencil on a sheet of paper: 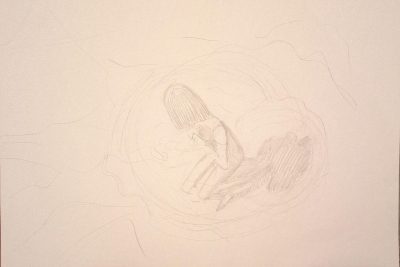 Clearly, I do not have the experience needed to accomplish such objectives. I think that I could have achieved capturing the posture of the woman in the canvas, yet my problem was the watery effect, which I am still trying to handle. Thus, I decided to develop a piece of my own which, besides sharing the concept of water, also shares what the real artwork transmits. This was the second draft, or more precisely, the first draft of the determined idea: 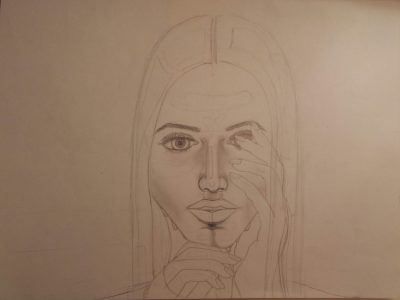 The same way that Gravinese portrays the insecurity, shame, fear and for that matter, bashfulness of the woman hiding behind her hair and almost underwater, my purpose was to capture those feelings by drawing, also a woman getting out of the water and hiding herself from anyone who could hurt her. Then, I started to paint it: 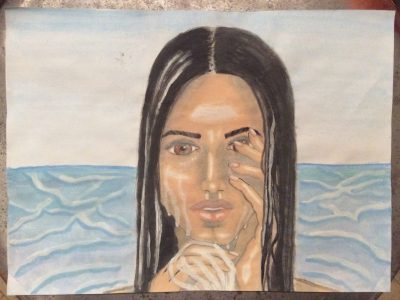 It took me a while to finally accept that the painting was finished. As well, I tried to copy the technique, however, nor oil or a canvas were disposable, so I replaced both materials for paint and a white sheet of paper, which are more reasonable. Critically, I understand that the motion of water neither its effect on the woman’s skin could be reached. Nevertheless, it was the best I could do. For now…

While painting I needed to try how did the different combinations of colors were to see if they would fit to expectations that I had as regards the palette that I would be using. This was the sheet of paper were I tried them:

In order to achieve the colors that I wanted for the woman’s skin, its shadows and reliefs, and the various tones of blue needed to capture the essence of water, I tried several times. For the shadows and reliefs, I painted a first layer of watery blue in the areas where the shadows would be, for instance, below the lower lip, on the upper lip, beside the nostrils, under the nose, above the eyes, etc… Then, I applied a second layer of yellow where the lights would be.

Once I had finished with these, I went on to paint the whole face with an homogenous “skin” color made up of a mixture of red, yellow and white. After many, many layers, I proceeded to color the lips and the nails with a more reddish-pink tone.

Subsequently, I colored the iris of the eyes. But before I continued to remark the pupil, I did the hair, the eyebrows, the eyelashes and the pupil. When everything dried out, I decided to do the lights and wet effect with white in the eyes, the drops, the hair, and the hand, which supposedly in being taken out of the water, and hence has a kind of cascade over it.

Mistakenly, I colored the background as the last thing left. I drew the line of the horizon in darker blue and then painted the rest with a more diluted version of the same blue. Then I painted the white lines and after the blue lines beside them. To top it all, I used the remains of this blue mixed with water to give the sky a bit of color. I find this an error because it is usually better to color the background at last. That way, it is easier not to trespass and paint over the figures, in this case the woman.