“Lady in the Looking-Glass: A Reflection”

In the past few weeks, in Literature, we have been working on one of Virginia Woolf’s stories called “Lady in the Looking-Glass: A Reflection”. At first we learned about Woolf’s early life and as a writer as an introduction. Then we went on to read the story. Once we were finished we were set in pairs to answer six questions out of eleven from which we could choose, and two extra assignments. I answered jointedly with Juana Zufriategui. These are the following:

On the one hand, the images of the inside of the house reflect darkness, which symbolises that Isabella is dead inside. It portrays her by using all the powerful and negative characteristics of the human being. Woolf uses a simile to illustrate the dark side of man: “the room had its passions and rages and envies and sorrows coming over it and clouding it, like a human being.” In the same descriptive words, she uses sibilance which intensifies the fact that everything in the room was asleep, silent, dead. Besides, she talks about “sighing and ceasing sounds” to represent the chaos and evilness of the thoughts that rumbled in her head, perturbing her.

On the other hand, the images of the outside of the house reflect life, which symbolises the way in which Isabella shows herself to other people. It is a superficial portrayal of Isabella. In order to hinder her inner chaos, she uses nature, the garden, strewn with different and colourful flowers. Woolf uses specific flowers to symbolize certain features that Isabella fakes. The sunflower stands for loyalty, longevity, adoration, lavender stands for elegance femininity and grace, the convolvulus is extinguished hope and eternal sleep and the daisy stands for innocence of child and purity of thought. All of these things, she pretends to be, yet, actually, she is everything but those things.

2. What kind of contrast is there between the objects inside the house and outside the house, as they are reflected in the mirror?

The objects that are inside the house are in a complete chaos and turbulence, “ nothing stayed the same for two seconds together” meaning that through the use of obscure objects, the narrator expresses movement in a sorrowful and depressive tone. Whereas the objects outside are well organized and taken care of. We can see this in a “perpetual sighing and ceasing sound, the voice of the transient and the perishing, it seemed, coming and going like human breath”. through the previous simile, the narrator is foreshadowing the fact that isabella is dead but alive as she has no emotions or thoughts, but she stated the appearance isabella portrays at the looking glass reflection. This has a strong relationship with isabella herself, since her person is composed like this. On the outside, she looks like an organized person while on her interior she is a mess. She is “superficial and perfectly empty”. The narrator portrays this through the use of different objects in order to describe diverse personalities. “ ig was a strange contrast— all changing here, all stillness there”

3. Describe how the narrator attempts to compose the portrait through the mood inside the room, through her own imagination, and through the presentation of Isabella in the mirror.

All throughout the story, as the readers, we think that we know perfectly well how Isabella Tyson is. However, as the last paragraph unfolds, we acknowledge that what we think the narrator was certain about, was not. At the beginning of the story we see her as a very social woman. We believed all these assumptions that they were “letters of intimacy and affection, violent letters of jealousy and reproach, terrible final words of parting”. We think that she united with many of her friends and wrote to others due to the vast amount of letters that she concealed in her drawers.

By the symbolism of the flowers strewn along the garden we imagine that she was adored, loyal, elegant, graceful and innocent. This is regarding the “sunflowers”, the “lavender” and the “daisies”. Through the narrator’s words: “she must be happy”. We assume that because of the way in which she acts, she superficially shows to the others, that we know who and how she is. Nevertheless, as she approached the looking-glass, getting closer and into the light, flicking away the things in the room that were blotting her out, we can actually see that those letters that we thought were connections with old friends were, instead, old bills that she was not willing to pay. We finally see the “truth”.

4. What material objects inside and outside the house does the narrator use to imagine Isabella’s life?

The narrator uses flowers to imagine isabella’s life. He describes her life through her appearance “ her trance of immortality”, “white and violet blossoms”, sunflowers”. He also describes how organized she is and how delightful her life is as she gently pick up flowers on the garden in her “thin summer dress”. Afterwards, the narrator says that she is rich and has travelled a lot because of all the objects that may have bought in “the most obscure corners of the world” such as “ the rugs, the chairs, the cabinets which now lived their nocturnal life before one’s eyes” meaning that actually isabella’s head is so messed up that even the furniture is moving around at night.

5. What are Isabella’s letters supposed to conceal, according to the narrator? What would one know if one could only read them?

When you first read , the letters are supposed to be love letters from isabella’s past and short relationships. They were suppose to reveal information about her. “ one would find the traces of many agitations, of appointments to meet, of up braidings for not having met, long letters of intimacy and affection, violent letters of jealousy and reproach, terrible final were love letters”. However, later it is revealed that this are actually bills, so we discover that there is no love in isabella’s life. She is determined to “ conceal what she did not wish to be known” . And apparently she did not wish people to realize the fact that she is dead alive as she has no feelings or thoughts.

6. What do you think is the role of the mirror in the story? How has the mirror been used as a metaphor in literature?

In the Lady in the Looking-Glass, the mirror acts as a metaphoric element in order to represent a specific message, a moral: “People should not leave looking-glasses hanging in their rooms”. The mirror is transparent, it is able to penetrate into every detail as things get closer to it. Therefore, nothing can be concealed from them. The farther the objects are from the mirror, the less it is able to uncover. That is why while Isabella is in the garden she is blurry and we cannot get to know her. Works the same way with people, the further away people stay from each other, the less they will learn from each other, and because they do not know each other, assumptions start to pop up to fill those empty spaces that neither of them are filling.

At the ending of the story, when Isabella begins to approach the mirror there is a specular moment, an epiphany, a moment of realisation and revelation in which all the superficial layers that Isabella constructed around herself, the plants and lack of light that hindered her act no longer as barriers and disappear. Hence, she is able to portray her inside and true self.

Besides, she doesn’t have a choice to show who she is with the mirror in front of her. This way is represents the fact that there are things that whether she likes it or not are going to be revealed sooner or later, so she has to learn to accept and deal with them.

7. Describe the characteristics of this story that resemble stream-of-consciousness narrative technique.

The stream-of-consciousness technique is a literary style in which the author writes their thoughts, feelings and reactions and depicts them in a continuous flow uninterrupted by any description or dialogue. In the case of “Lady In the Looking Glass”, it affects the story by distorting the point of view with the thoughts and feelings of the narrator. This is why we don’t actually know Isabella until the end. We are blinded by what the narrator thought she was like and what it imagined how her life was like without never stating something in absolute certainty. Due to the modernist technique of stream-of-consciousness that Virginia Woolf applied at the moment of writing this story, we are limited by the eyes of the narrator, which can only communicate to us what it sees. 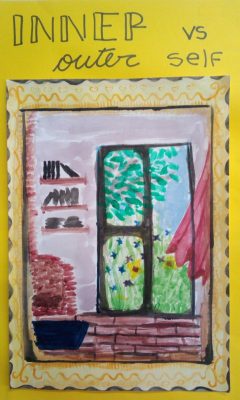 This is a drawing that I painted representing what is seen reflected in the mirror regarding Isabella Tyson’s inner and outer self. While inside the house/mind there was emptiness, death, silence, chaos, she showed herself as the garden; filled with colour, cheerful, carefree, alive and in control.

Read the following text. How is this related to the story?

In Virginia Woolf’s “Lady in the Looking-Glass”, the protagonist of the story is concealing her true self from the eyes of others by creating the image of an ideal woman at the time. Similarly, what the text by Sandra Gilbert and Susan Gubar “The Madwoman in the Attic” suggests is that Isabella Tyson was not the only one who was not living freely, but all women of the Victorian Times were. By comparing “Lady in the Looking-Glass” with other texts, the authors suggest that women were confined by the images of women that men and the patriarchal society conceived, from which they could not go any farther. Therefore, women were no longer themselves but an artificial and rather ambiguous construction of a “Ghost, fiend, and angel, fairy, witch, and sprite”. It existed this manichaean vision of women who was either an “angel” or a “monster” that distanced them from their individuality.

Besides, they were subjected under the power and authority of men. Although they were firstly personified as the Virgin Mary who acted as the intermediary between God and human, they were gradually brought down to a “domestic angel”. The “Eternal Feminine” expresses how men subverted women into a position from which they were deprived of any opinion, importance or action other than acting selflessly to the service of men, which was the solely deed they were acquainted capable of: without men’s “life of significant action”, women were worthless.

This is how “Lady in the Looking-Glass” is one of the first feminist writings. Isabella Tyson dares to finally stop looming behind the shadow of the female construction of men and disclose her true self, accepting who she is and what the images the mirror reflects regardless of what society might think.