From Victorian Times to Modernity

Throughout the second Term of the year, in Literature, we have seen, as well as “The Destructors”, “Lady in the Looking-Glass: a Reflexion”. This story by Virginia Woolf was from the XIX century which not only matches with the Victorian Ages but also with the rise of feminism. Woolf was one of the first writers in talking about feminism and the figure of woman at the time.

In order to analyse the story we were told to answer eight out of thirteen questions, 2 of which were mandatory and six up to our choice.

The last question was to connect the story by Virginia Woolf with a text by Sandra Gilbert and Susan Gubar besigned as “The Madwoman in the Attic”. It depicts what was women’s role in the XIX century, how they were treated and how that affected their lives. They were seen as inferiors to men, beings with no opinion or value of their own unless they were accompanied by a man on their side. Besides they were condemned to domestic work without any political or social voice and poor ability to be economically stable to live without a man as the only job they were allowed to do did not pay that good.

The story “Lady in the Looking-Glass: a Reflexion” introduces a woman called Isabella who we can see through a mirror inside the house that she spends much of her time outside in the garden taking care of the flowers and their appearance. Yet, as she enters into the house and approaches the mirror, we are able to see her more clearly and unconceal her true self. I analyse this through the way in which society impacted on the women’s life. Because women were oppressed by the superior and powerful men they had to repress their true identities and live as men wanted them to. Therefore, women had to act in a certain manner that was not them. This is why along the story the narrator says “she must be happy” or “if facts were what one wanted”. People had no clue of what Isabella’s true self was like so society began to make incorrect suppositions based on what she showed; a mask to protect herself from criticism and spite.

I could relate “Lady in the Looking-Glass: a Reflection” with an artwork that I made in Art class a few weeks ago. At first we had to create a readymade. This refers to a piece of art that by just changing a small detail of an object that has been already made, it transforms into an artwork. I used a portable mirror which opens as a book and inside has a tiny mirror on each lid. What did I change? I pasted in the front part a piece of paper with the Facebook logo. (I owe you the hd) 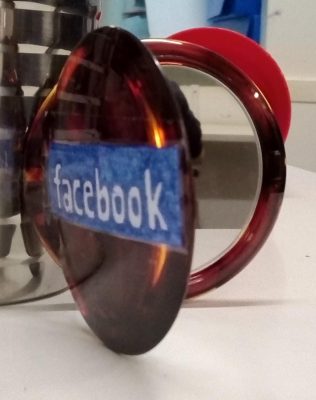 Later, we had to make a drawing or a painting which captured the message of the readymade; that what people show on social media is not their real self. It was then that I did this: 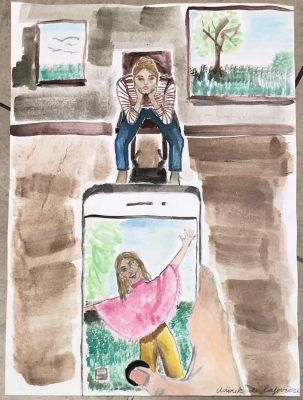 I connected the Victorian writing to modern life nowadays. And casually the use of colora match the descriptions of the environment in the story. Outside it was all beautiful and bright (life) while inside darkness dominated (death).